As I am from a town of Rajasthan, I didn’t get a good education, I never ever thought that I will get AIR 236 . I didn’t even know about IIT till the end of my 9th grade, the time when my cousin brother Gaurav got AIR around 2800 and everyone was celebrating. As my parents were also not educated too much ,so they were also unaware of IITs. My father is a businessman and mother is a housewife, they helped me emotionally and financially during my preparation. As I was fond of science and technical stuffs, I was curious to know about IITs. I got to know about it from my brother Gaurav that it is a kind of top engineering college of India and it is a big challange to get into it. As my brother Gaurav did coaching for kota, I also took admission in kota, in the institute Vibrant Academy. And believe me it was the turning point of my life.

During 11th std.
I still remember my first day in Kota, a city full of young students. You can see them everywhere. They gave me the feel of competition here.  I got the 9th batch in the beginning of the course, I really didn’t know what did that mean, After two three days and making friends in kota I figured out that being in 9th batch meant that there are 1000s of students ahead of you in your own institute, that made me feel that how would I ever compete with the lakhs of students which give JEE when I am at 1000 position in 3000 students. But a month passed and I score around 300 rank in test paper of institute and my batch changed to p4 but still that wasn’t enough to get a rank in JEE. As the months passed I became more and more aware about the system meanwhile having a roommate in hostel  who is scoring top 10 ranks in institute in JEE was kind of depressing to me but I got used to it. I increased my targets slowly. I first took a guy who was scoring around 200 in institute, I chased him in the next test and got under 200. A time came when I got a rank around 400 after 200 in last test, this was really a frustrating moment in my life, I literally cried a lot in bathroom one day. But after a month everything got settled and I forgot it, and then I got ranks around 100 after that. Days were passing and my ranks were getting better and better in all the tests, I increased my target bit by bit. and got int 3rd batch in the end of the year and scored a rank 67 in the end and this is how my first year ended. Actually I enjoyed the hostel life too in these days, I loved the food of kota very much, especially the “patis” was all time favorite, whenever we got bored, we went to market for eating patis, this was really a nice passtime in kota.
After the end of 11th we got vacation of around a month from institute. I literally enjoyed it fully… eating lot of food made by “mother”, after having painful food of mess for a year, food made by mother is delicious than everything in the world.

During 12th std
This was really a time my life in kota was really changed, In the first test of 12th in institute I got a rank 20 among all the students, it was really a dream for me. And in the next test I got around 30 and then I got into 1st batch of my institute, total 30 student studied in it. All the students were shocked by my performance so was I and all teacher were too surprised as how did I get managed to get into 1st batch directly from 3rd in 11th. I give this credit to my roommate in kota, Shubham AIR89, by which I got to know about the time managemant, as I used to get involved in problems for large time. He adviced me to leave such questions and do other, and a lot of advises like that.  Then in 12th I maintained a rank around 37 througout the year. And me and my roomie were in the same school so we used to study together for our school exams, we didn’t gave much time for that kind of exams, I took the boards very lightly. I attended the classes of english by our institute for boards and also for other subjects too. And so the days passed and we got vacations for diwali and I enjoyed it but soon after that a big crisis was waiting for me in kota
I got badly ill and it was found out to be Hepatitis A, jaundice, my parents came kota and took me to home and thus 1 and half months got wasted in medicines and rest.  I never knew that anything like that will happen in my life. I missed a lot of syllabus during this time and when I got well almost the course was over so I had to learn and understand the whole part on my own so I did. But everyone else was revising the topics, it was weird, really a terinleexperience for me and thus december and january passed in revising the syllabus and learning new things, after that the time for boards came near and I really got scared from it. I started to focus on boards before one month of boards and did a lot of hardwork reading all the NCERTs and the physical education book too, most difficult hing for me was that I was from RBSE and now I was giving CBSE, the whole pattern was different. I studied day and night for english for around 7 days, read all of the guides. But when the day of boards came I literally fucked up in it, first paper was of english and I gave it too slowly that I was unable to attempt 17 marks questions, and in the final result I got 58 in english. It was a damn bad shock and then I decided to get 100 in all of the remaining exams and studied very hard for all of the remaining. And in the final result I got 100 in math , 99 in chem, 92 in physics and 89 in physical education.
Then after boards we started to study for JEE again and then I used to study with my roommate with the stuffs like VJSP( Vibrant JEE success Package) and some resonance materials for final preparation of JEE which included rank booster, rank master and 2 more kind of books, we did thousands of problems during those days from them. This was the time which I can say that I really did a lot of hardwork. In between, I gave JEE mains, in which my expected score was around 300/360. And after 6 weeks ….

may 25, JEE Advanced 2014
in Udaipur, I didn’t sleep more than 4 hours that day, I was nervous about the exam. I woke up at 5 am and thought about it. Then I did yoga and meditation, this literally helped me to overcome the fear. Then I left for exam at 7:00 am and got to exam centre at around 7:45, waited upto 8:30 and then we got into exam halls, gave paper 1 and it didn’t do good in it but then came the second paper, I nailed it. I didn’t left a single hole in the OMR. And I was very happy and exited when I came out of the exam hall as I knew that I did well…

and then the day june 19, result date
my brother Gaurav, called me from IIT Kgp, and informed me that I got AIR 236, it was the happiest moment in my life indeed, my eyes were glittering with joy and I gave this news to everyone in my family, everyone was happy…
in between I just forgot about the boards cutoff that was still not declared and my percentage was 85.8 in boards and last year cutoff was 81.6%, I knew that it is going to increase this year, I prayed a lot for cutoff not exceeding 85.8%…..

god listened me and saved my AIR 236 with the cutoff of 83.2%
In the whole preparation, especially my grand pa, Gaurav Bhaiya(IIT Kgp Meta), Bade Papa, Shubham Rathi(IIT D Cse), Tushar Maheshwari(IIIT), Somesh Ajmera(NIT Surat), all Kota friends and whole family supported me a lot.
My favourite line in kota was… this
from HC Verma
Dedicated to Indian Philosophy & Way of Life of which my parents were an integral part. 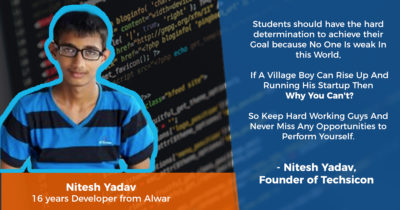